Aponi, also known as The Witch, is the main antagonist of the Crypt TV series Stoneheart. Her backstory revealed that, during the late 1600s, She was a practicing witch known for being a protector of women. While her fate was never explicitly stated, it's implied that Aponi was executed during a witch trial.

She is played by Stephanie Edmonds.

She appears as a pale humanoid with large hair, and four horns. Two on the sides of both the top and bottom, with the bottom curved outwards. Her eyes are pale with a hint of blue, and her hands are black and dirty.

The outfit that she wears is sleeveless, brown, has lots of robes, and yellow jewels or bells. It resembles more of a gown, as it reaches down to her feet. It remains unknown what her past self looked like before being killed.

Aponi's defining characteristic is her intense devotion to and protectiveness of women.

Aponi lived during the late 1600's. In life, she was a practicing witch and was known for being a pprotector of women. While her fate was never explicitly stated, it is heavily implied that she was executed during a witch trial and was burned at the stake, as seen in the Crypt Tome in Season 3 of "Sunny Family Cult".

Aponi appears throughout the current two seasons of "Stoneheart" as it's main antagonist. Her statue appeared in the first episode of Season 1. As revealed in Season 3, she is rejected by, in which she kills her and responds saying "Just like the rest !", implying there were more, and possibly Inessa, and Rebecca too.

MAYHEM, She also makes multiple cameos or references, such as two pictures of her seen in the series "MAYHEM, MURDER, AND MONSTERS", as there was two drawings of her, one with the words "A ghost ? A banshee ? A witch ?". She also appears in a book as seen in Season 3 of the "Sunny Family Cult" series, as in one of the pages she is seen with Look-See, and Mordeo as well as having a two pages of her own, as she is seen being burned alive, and another being her broken statue.

She also appears in Taylor's flashback along with multiple other monsters, as well as her silhouette. It is unknown whether she appears in reality, or of she truly is a ghost as most of the deaths are caused by the one she's protecting.

While she does not make any physical appearances, Aponi's handiwork is featured for a three-episode arc in the miniseries Mayhem, Murder and Monsters as a way to promote the second season of Stoneheart. In the miniseries, Aponi came to and lended her power to sixteen-year-old Kiara Carpenter of Nassau County, Long Island.

Episode 4 "The Smell of Burning Ants"

Episode 5 "The Voice in Your Head"

Episode 6 "Transference"
Add a photo to this gallery

On the book, along with the Look-See, and Mordeo
Add a photo to this gallery 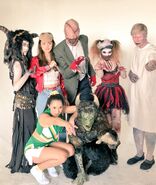 Aponi along with the Look-See, Taylor, Ema, Fluffy, Giggles the Clown, and Mr. Nowak

Retrieved from "https://crypttv.fandom.com/wiki/Aponi?oldid=1015"
Community content is available under CC-BY-SA unless otherwise noted.